Despite a one-week delay in delivery and smaller than normal sales following a price increase from the vendor, the 2021 annual fundraiser was still a success.   The pick-up event held at Hodgen Distributing warehouse took place on December 11th, with Branch members handing out boxes to customers.  Thanks to Paul, Gary W., Gary F., David, and Josh for the heavy lifting again this year. Changes made in 2020 were kept in place, with customers remaining in their vehicles while Branch members/family loaded boxes and all orders being pre-paid.  We are again grateful for the use of Hodgen Distributing as well as the equipment loan from Pendleton on Wheels and the VFW Post 922.  Sign Men in Pendleton helped with advertising this year.  Sue Peterson took a few photos from this year’s event. 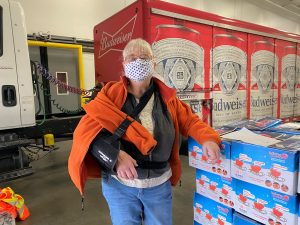 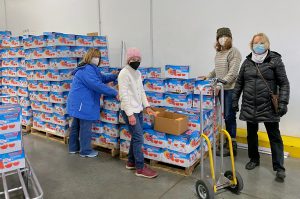 We had another successful grapefruit event in 2020, even with just a few COVID-19 related changes.  The annual fundraiser culminated in the December 5, 2020 pickup event at Hodgen Distributing in Pendleton.  Customers were asked to remain in their vehicles while AAUW members brought out their boxes and loaded them in the cars.  Another change that was implemented due to COVID was that all orders were pre-paid, so no money changed hands at the pickup event.  These changes worked so well and kept things moving, that they will likely be implemented in the future.  A total of 658 boxes were sold this year, even with some price increases.  The Branch raised funds to pay for STEM projects, scholarship awards, and Equal Pay Day activities.  Thanks to all the members (and spouses too!) who helped sell and distribute boxes. 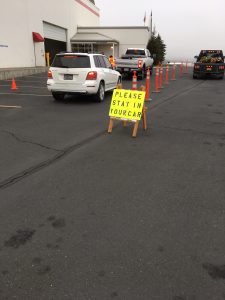 The 2019 annual grapefruit sale culminated with the December 7th pickup at Hodgen Distributing.   During the successful annual fundraising campaign, Branch members sold a total of 690 boxes of the Texas sweet ruby red grapefruit.   The cost of boxes was the same as in 2018:  $20 for a 20 lb box and $10 for a half box.  Other local groups were also selling grapefruit this season – from Pendleton High School and the Walla Walla baseball team, which may have cut into overall totals a bit.   Funds from grapefruit sales went to pay for the STEM bus over to La Grande, BMCC scholarships, and Equal Pay Day activities.   Thanks to everyone who helped sell and distribute boxes – members and spouses alike! 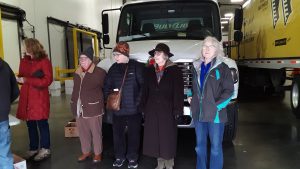 The 2018 annual (and only) fundraising event for the Pendleton Branch was another success.  Members sold a total of 710 boxes of ruby red sweet Texas grapefruit.  The cost this year was $20 for a 20 lb box and $10 for half box.  Sales plus a bit in donations and minus expenses, left a good final total for the Branch’s only fundraiser. Pickup was again held at Hodgen Distributing warehouse in Pendleton off Westgate.  They are just great to work with, and the space is really awesome!  No one remembered to take photos this year, but several members came out to help with the sorting and then to help with the pick-up of the orders.  Until next year! 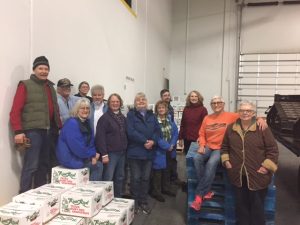 The 2017 Fundraising Event was another huge success, even with Hurricane Harvey causing problems for our supplier earlier in the year and with last minute delivery problems from the vendor in Texas to Pendleton and other northwest drop-offs.  With the delivery delayed until Sunday, the word went out to all the customers that the pick-up event would be on Tuesday, December 5th, from 2:00-6:00pm. Our Branch members showed up enforce on Monday afternoon to sort over 700 boxes and cull out any bad fruit.  Once again, we found just one box of ‘bad’ grapefruit out of the entire order.  Due to another glitch with the shipment process, the vendor gave us 50 extra boxes, above our order number.  We were able to sell these extra boxes and add those dollars to the total amount raised.  Overall, most of the customers were very nice about the delay and were just thrilled to once again get the wonderful product.   By the end of the event, we sold 714 boxes this year.  The final profit made is posted in the Member’s Only page.

This was the second year having the pickup event at Hodgen Distributing on Westgate, and they were especially accommodating to us considering the late delivery and having to work out of their facility one a weekday.  We sincerely appreciate working with this great local company and letting us take over their space for a few days.

This is the only fundraiser event for the Branch. Please help us continue our support for local scholarships and STEM programs. 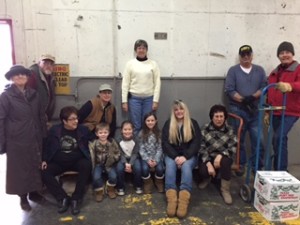 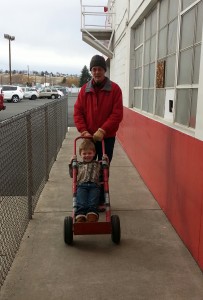 The annual fundraiser event is finished for another year. Sales were about the same as last year: 644 boxes in 2015 compared to 639 boxes in 2014. For the 2013 fundraiser, the Branch sold 697 boxes which was just slightly fewer than the 715 boxes sold in 2012. Costs for each box continue to increase which impacts profit totals for the Branch.

The sale of the Rio Star Texas Sweet Grapefruit first started in the Pendleton area by AFS (American field Service) exchange program around 1983. This was a common way for those AFS chapters to make money to send their students overseas and to help bring students to the US.  The AFS representative recommended it to the Pendleton area families and got them started – 50 boxes that first year.  According to AFS member Julianne Sawyer, “it got to the point that we had more money than we needed and were not sending students. Also, there were just three of us running the chapter and selling fruit.”

The project involved just three ladies selling and organizing the sale and enlisting their husbands when the fruit was delivered. When one lady moved out of the area, the others decided it was time to make a change. Several area groups were interested in it as a fundraiser but since both ladies were also AAUW members, they offered the grapefruit sales to the Pendleton AAUW branch. And the rest is AAUW history.  Julianne think that was in the mid-1990’s but the records aren’t clear.

Over the last few years, the Pendleton branch has used the grapefruit sale as their only fundraising event of the year. Members start taking orders and collecting money in mid-October. Boxes of grapefruit are delivered off the PGG loading dock, usually on the first Saturday of December. It’s become an unofficial holiday season event for members and customers alike.