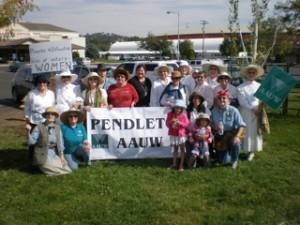 In addition to the struggle to obtain full suffrage through a constitutional amendment, the suffragettes had launched state-by-state campaigns to win local and state suffrage.

Actually it was the western states and territories that were favorable to women’s suffrage, maybe because western men, faced with a shortage of women on the frontier, wanted to encourage female immigration. This is just a theory, but it is true that western states led the way: Wyoming in 1890; Colorado 1893; Idaho 1896; Utah 1896; Washington 1910; California 1911. Women in Oregon campaigned for suffrage from 1870-1912, and Oregon has the dubious distinction of placing the question of women’s right to vote on the ballot six times—1894, 1900, 1906, 1908, 1910, and 1912—more times than any other state in the Union! Finding themselves surrounded by states that had granted women’s suffrage, and worn down by the perseverance of strong women, such as Abigail Scott Duniway, the men in Oregon finally granted women the right to vote in 1912!

It is now a hundred years later, and members of the American Association of University Women, Pendleton Branch, along with AAUW of Oregon state leaders, will be honoring suffragettes by joining in the Westward Ho! Parade on Friday morning.

When you see these women marching in their gowns of white with sashes proclaiming VOTES FOR WOMEN and carrying signs demanding the right to vote, take a moment to remember the long road it took to enfranchise women in the United States.